IPTV is basically a combination of audio, video and data services. It is not a new idea or a new development.
It is a result of high bandwidth and high speed internet access. In the past, the speed of the internet did not fit the structure what we were talking about.

In recent times, internet speed and bandwidth have increased considerably, which ultimately brought IPTV dominance and logical success. IPTV is a structure used to distribute digital television services to subscribed users for this system.
The distribution of the digital television is carried out using the Internet Protocol over a broadband connection. The use of the Internet Protocol is provided over a managed network, rather than the use of the public Internet, in order to protect the quality of the service offered. The IPTV service is usually provided with images and video based on the user’s request. IPTV is not like any ordinary television program broadcast over the Internet. There is an authenticity within itself. Structure; Closed, private TV system. In detail, the distribution of IPTV to the user is based on reliable IP-based channels, resulting in a significant increase in content distribution control.
IPTV allows the choice of user options and preferences to be followed. The systems used to deliver both television and video signals to subscribers or viewers, such as preferences, timed selections, are called IPTV Systems. As NOKTA BMS , we provide that IPTV Systems, an efficient and fully sought-after method for voice, data and video distribution, It is offered in an integrated structure with advanced, user friendly and higher speed access technologies. 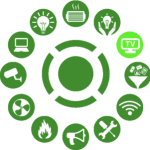